There is a courtyard type enclosed patio area at Little Acre, catching the sun during the day providing a sheltered pocket of privacy from the world around it and more importantly conveniently placed in arms length of the fridge, hence the perfect place to entertain the masses.

At the latest Chelsea Flower Show we got slightly carried away in the moment and with our dreams of that Al Fresco lifestyle in reach, indulged in purchasing the most gorgeously weathered, knarled, yet perfect, outdoor table and benches from Kadai firebowls. 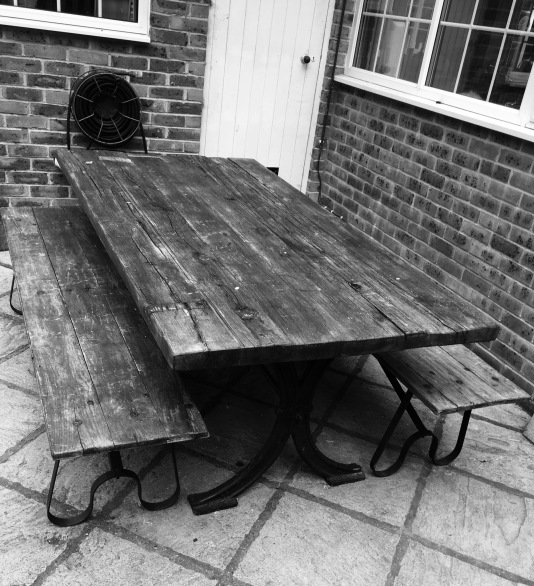 With the ideal location identified and the table delivered to the bottom of the garden we just had to move it into position, sit back and enjoy it….simple!! Or….as it turns out….not so simple. The table was a fine example of a quality product, the beams recovered from the roofs of old houses in india, made of solid uncut teak. Without knowing it, it was all I’d ever wanted from an outdoor dining set. We had however overlooked one small thing, that such a product, such a perfectly put together well crafted product, was unbelievably heavy!! With the best will in the world the table simply would not budge from the location the delivery driver had kindly offloaded it. After a moment or two of brain scratching we decided there was no other option than to invoke our inner caveman.

Utilising techniques mastered by those who came before us we located some old round fence posts (kindly left by the previous owners) and rolled the table top up through the woodland, transferring them from back to front with each push, Fred Flinstone would have been proud! It may have been slow and used backbreaking effort, but it was effective and with the table now in place it looks like it had always been there and that the house was simply built around it.

Due to this area being separate from the rest of the garden and almost presenting itself as a blank canvas, I was finally able to let the designer in me loose. The intention is to create a welcoming entertaining space complete with outdoor kitchen, darts board, and chiminea, with the finishing touches of a pergola, a living wall and Japenese moss balls (also know as “Kokedama” – which is basically the art of enclosing a plants roots in a moss and suspending them from strings), attempting to recreate as best as we can the tranquil spaces perfected by designers such as Ishihara Kazuyuki.

With the table in place and walls cleared, ready for the crisp clean paint waiting to adorn them, there’s just one small issue. Slightly off centre towards the middle of the patio is a raised planting bed. The bed sits about 2 foot high and taking pride of place, dominating the space, is a mature Camellia shrub (Camellia japonica). It’s a beautiful specimen with waxy dark green foliage, adorned with dramatic red flowers throughout late winter and early spring. I know that in order to achieve what we want from the area, the entire raised bed, including the Camellia, must go. This leaves me with a large amount of inner turmoil. I love to plant, to see things grow, to watch them through the seasons and admire them as they establish themselves, thriving often in competing environments. So to cut something down which has been there for over two decades, is done with a very heavy heart. The tendency to anthropomorphise everything around me causes me to apologise profusely when the time comes to bring out the saw. But it must be done. The shrub is not only aesthetically displeasing due to its bad positioning, it casts large shadow over half the patio and once the flowers have served their purpose they distribute themselves extensively over the whole courtyard, blocking drains, covering the ground and smothering the underplanting.

So out came the saw, spade and brick bolster. After cleaning spent flowers and removing the extensive covering of weeds, we were able to rescue two Heucheras and a Cyclamen which had laid hidden, fighting to survive. These are now potted up and put aside for redistribution once a suitable location can be identified. Copious amounts of soil, a large number of bricks and the removal of many branches later, we were left with the remains of the Camellia which as it transpired had been in place considerably longer than the patio itself. 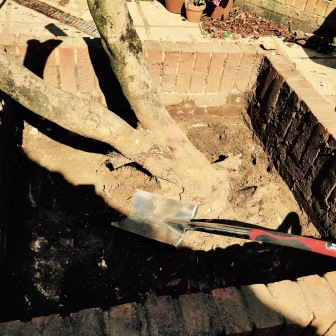 It’s root system spread below the foundations and removal was far from easy. There was an overwhelming sense of achievement once everything had been cleared however this was rapidly replaced by the realisation of what we are now left with. The once complete patio was now considerably less so,  with a rather significant hole surrounded by partially broken slabs and a mixed layer of soil and rubble where the shrub once was.

We powered on, knowing we were one step closer to that idyllic entertaining space I’d roughly sketched out when we first moved in. There was however a slightly unforeseen setback. Due to the ever decreasing pot of money we decided to retain the existing slabs and just source replacement for the damaged area. Although as it turns out this presented a rather significant issue, the slabs were laid pre metric and were no longer produced in the size we required. So back to the drawing board…literally! Pencils in hand, creative juices flowing (well, trickling….it had been a long day!) we decided to widen the area and create a central feature. Using a different type of slab, the intention is to produce a two tone effect, which will be mirrored in the colours chosen for the paint on courtyard brick walls……. but that certainly is a job for another day. So for now we will just sit back at our newly positioned table and raise a glass in memory of the now absent Camellia and its beautiful red flowers.