The house at Little Acre mirrors the garden, in that it is 10 years past it’s best. Although everything is clean and well presented it is the epiphany of late 80’s early 90’s decor. At the heart of this is the large stone surround of the lounge fireplace. In spite of Little Acre having a working chimney, no mains gas supply, and a area of the plot consisting of a small woodland, the previous owners opted for a gas fire. This however, did not fit with the country living ideals we had crafted in our minds. 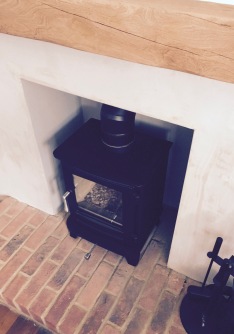 So after some research we selected both the look we wanted to achieve (a nice traditional stove, something that looked like it was older than the actual building it stood in) and hired a company to undertake the works (Fire bug  – who did a superb job)

The imposing stone surround was removed brick by brick (with aspirations to find use for the stones elsewhere in the garden) the marble hearths set aside (again – grand plans for those later) and a fully functioning log burner was installed.

So all that was left to do was to sort out a good supply of fuel for those cold winter nights, where the warm glow of the fire comforts not just the body but the soul. This part would be the easy bit, surely, I mean, we own a woodland, right……??? The woodland is about a quarter of an acre and needs a bit of management. It was planted in the early 90’s with a range of species, including, hornbeam, birch, maple and ash. The trees however were planted less than 6ft apart and were not thinned as they grew. This resulted in them being beanpole like in shape, their tall thin trunks terminating in small restricted canopies high above us. Before we moved in the thinning process had commenced and a number of large trees, including a mature oak, had been removed, the remains of which we had agreed could be left at the property, so the logical part of our brains thought that firewood wise, we must be half way there.

Turns out burning stuff is infinitely more complex than we could’ve ever imagined. Although growing up many of my relatives had open fires, we never actually had one ourselves. So this was all new. Keen to learn and desperate to go full force into embracing that picture postcard country lifestyle, we got researching on the best way to prep and cut logs ready to be burnt.

Now, having a basic understanding of how to create a fire, we knew that water was not a great component and that wet logs therefore didn’t really work. But what we hadn’t fully grasped was just how long ‘dry’ logs took to actually become dry. Not having come across a moisture meter before we hit a steep learning curve! 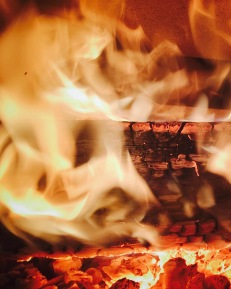 For those of you as unaware as ourselves, it would appear that in order to burn logs in a log burner they need to be seasoned. This effectively means being given the opportunity to dry out, ideally over 2-3 years. Using dry logs prevents tar building up in your chimney….which according to our ‘fire guy’ is not something you want in your chimney! Our current stack of now undesirable wood would therefore require cutting to size, splitting and storing in a dry airy location until their moisture level is below 20%.

So that rather significant pile of logs which had been kindly left for us and on which we were hanging our winter warming dreams, would not actually be of much use…..well, for this year at least……to be continued……