So back to the woodland and those pesky logs that were currently not suited to meet our pyromaniac like need to burn stuff  ….(see part one)

In spite of it being early August the overwhelming desire to ‘test’ the new log burner took control. The power of the internet provided us with a local supplier who would deliver to us locally sourced, seasoned wood, along with (unbeknown to them) the hopeful realisation of a long sort after lifestyle. Little did we know another lesson awaited us. As it happens (and as I’ve experienced a number of times before), when you order from the web you never 100% know what you’re getting until it arrives. Our small log delivery, which I foolishly thought would be a quick job to sort and prepare ready for the cold winters ahead, filled the back of a pick up truck. As the driver pulled away I looked at the mountainous pile of logs with bemusement that was rather rapidly replaced by the dread of the task that lay ahead.

Eagerness had once again won the day as the woodshed was not exactly ready for housing wood and delivering on its only real function.

It was littered with leaves swept there from the many autumns that had gone before us, random debris had gathered, along with the not insignificant amount of damp logs we had already placed there from in and around the garden. There were rotten boards that needed treating and the felt liner was not completely watertight.
Somewhat reminiscent of the greenhouse, this is a perfect example of the heart leading the head, if sense had taken hold at all then the shed would have been emptied, cleaned and prepped well in advance of being filled with a winters supply of logs….but where’s the fun in that. With a substantial number of logs (which did not come cheap) currently sat at the property boundary and the inevitability of the looming dark clouds overhead, we had little choice but to empty, sweep and refill the woodshed as urgently as we could, leaving it in its current condition and hoping for the best.

The logs were transported up through the woodland, across the old paddock and past the kitchen garden where the woodshed currently resided. Six trailer loads later and the pile had simply been relocated to just outside the shed. 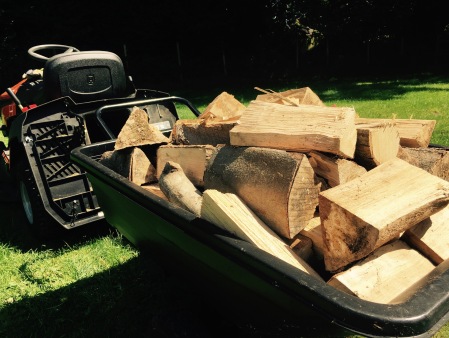 All that was left to do was to stack them…..and then came the rain! With a tarp hastily thrown in a dismal effort to protect our investment, we headed to shelter, where a growing thought worked its way to forefront of my brain. I had absolutely no idea how to go about stacking a pile of logs. No idea at all how to ensure the wood which had been meticulously protected from the elements for the previous 3 years, simply didn’t succumb to damp, mildew and mould. So, as was quickly becoming a common occurrence, we turned once again to the masses.

A nice young man from Minnesota, USA (@LifeinFarmland) had very kindly posted a video on everything you need to know about prepping, stacking and storing firewood and in that moment he instantly became my new hero, as cries of ‘to the woodshed’ could be heard resonating around Little Acre. 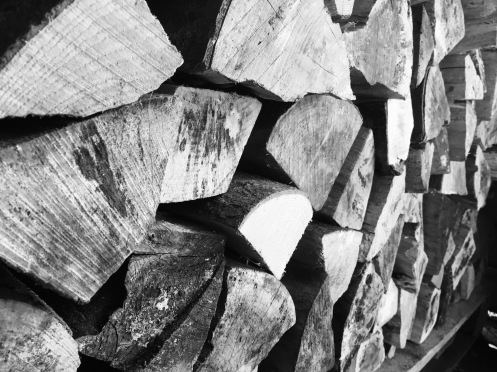 Three particularly tense hours later and after fair few failed attempts, I have to say we were pretty darn proud of our neatly stacked woodshed, feeling armed and ready for the upcoming winter, with the anticipation of the heart warming, soul cleansing glow of those said logs burning deep and long! (And I can tell you one thing, even when its 30 degrees outside, the sun is streaming through the window and the bees are buzzing on the surrounding flowers…there is still nothing better than that comfort of roaring fire…..the log burner ‘test’ was finally a resounding success!)

As the silhouettes of the trees sway, bearing the brunt of the storm, I find myself getting mesmerised by their forms, amazed by how they are able to absorb all that is thrown at them. #windydays #trees #natureisawesome #nature #storms #britishweather
As the light of the moon spread it’s way across the garden an eerie silence fell in its wake. Fantastic moon tonight, adding natural lighting to the winding, twisting branches of our oak trees. #gardenlighting #moonlight #oaktrees #gardenatnight #nightwalks #winternights #garden #naturephotography #wolfmoon
Winter beach days.....nearly an empty landscape to let the mind reflect on events gone by and turn to all the adventures the next decade may bring. #winterbeach #coastalwalks #mindfulness #familytime #newyearnewadventures #backtorealitytomorrow #naturephotography #beachphotography #brackleshambay #brackleshambaybeach
Today’s visitors to the bird feeder....it’s attracting a proper motley crew...not pictured are the 2 dozen great tits, chaffinch, sparrows, blackbirds and robins, not to mention the magpies, pigeons, doves and crows!!! It’s been a feeding frenzy! 💚🦅🦉🐓🦢(significant shortage of relevant bird emojis😂). #birdphotography #winterfeeding #birdfeeder #woodpecker #nuthatch #pheasant #naturephotography #
Not exactly what I was hoping to find on my winters supply of seasoned logs ....but fascinatingly beautiful non the less! #fungi #naturesweirdandwonderful #gardenwintercolour #wintertextures #wintergardens #deadwoodecology #natureisawesome #lichen #woodlands
It may be dull and raining but if you look closely there’s still cheer to be found with an abundance of colours and textures on the woodland floor. #woodland #autumnleaves #naturaltexture #leaves #moss #fungii #pinecone #sundaywalks #wintercolour #gardens #natureisawesome #naturephotography #
%d bloggers like this: