Whilst adding hedgerows, digging ponds, reinvigorating woodlands are all satisfying activities, they are all diversions from the fundamentals here at Little Acre. Although the front garden, paddock, kitchen garden and woodland are relative blank canvases (mass clearance aside), the main garden, in its prime, would have been a lush display of perennials, trees, shrubs and an almost innumerable amount Roses and Rhododendrons. Unfortunately these are all now past their best, with the garden being left largely untouched for a number of years. As we approach 10 months at Little Acre each week it seems like something new appears in the garden. What looks like a dull uninteresting non-descript shrub in summer, shows its vibrant colourful stems in winter like a peacock unveiling its feathers. Areas that previously appeared barren are now strewn with spring bulbs. Beds covered in a blanket of perennial weeds during months of summer growth die back to reveal hellebores and primroses in late winter/early spring.

Although from a design viewpoint nothing is where it should be, there are so many plants that can be repurposed. That being said, before this is possible each one needs to be nurtured and brought back to its former glory. The first task we have here is identification. Working out what we have so we can prune, split, propagate and care for it accordingly.

For this we initially turn to the gardening bible RHS A-Z Encyclopedia of Garden Plants followed by RHS Pruning and Training for management techniques. Having observed the plants across a number of seasons it makes the identification much easier and most of the plants are now tagged to at least a Genus.

One thing we don’t need identification on is the large amount of Rhododendrons and Azaleas at the bottom of the garden. The previous owners of Little Acre were regulars at Chelsea Flower Show and over the years had purchased a range of cultivars. Between the years of 1985 and 1997 they purchased over 70 from a range of nurseries at the show. You could say this bordered on obsession (yet an obsession I’m sure we can all totally appreciate when it comes to finding that thing that simply makes you smile). When they handed over the property, the paperwork included a detailed plant list and photos of each of the plants in flower. The cultivars included Little Beauty, Pink Pearl, Constable, Moonshine Bright, Blue Peter and Lavender Girl and the list goes on. 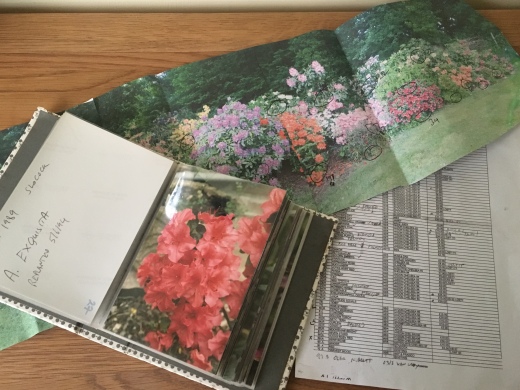 It is however a case of the same old story, the planting area that was thoughtfully laid out, equipped with irrigation system and clearly regulalry fed and cared for, now looks abandoned. Brambles are intertwined amongst the shrubs, the remains of broken pipes jut out of the soil, weed membrane reveals itself where the soil levels are low.  If I’m being honest I’m not the biggest fan of this group of plants, although I can appreciate their evergreen value, strong structural form and no-one can deny the beauty of a Rhododendron fully adorned in its flowery display.

In spite of my indifference I cannot bring myself to get rid of plants that had previously been so loved and passionately collected. Although I intend to incorporate the smaller leaved more subtle Azaleas into the main garden design, the majority of the Rhododendrons need to be moved. As previously touched on we want to introduce more structure at a lower level into the woodland and as such are presented with the perfect solution to our little dilemma (plus the added bonus that the architecture of Rhododendrons make a great base for some decent den building activities). The plants will be cut back where possible to improve their structures and eventually will be redistributed across the woodland. This can wait however as for now they are decked in a sense of anticipation, with buds bursting on every branch. Moving them later in the season will allow us to indulge ourselves and get one final brilliant floral delight out of them whilst en mass…..once the snow is gone that is!

And then there are the Roses…….(to be continued)