As a follow on from part one……I had one more day left on site with Matt and the team. I was already feeling pangs of disappointment for being assigned elsewhere for the remainder of the week and would not see this garden through to completion.  Day 2 was hard hard work, moving mountains of compost, battling 30 degree heat whilst trying to keep plants which thrive in partial shade out of the blazing sun. The old fitness tracker logged 28000 steps and once again I had had the absolute best day.

The design drawings of the garden showed an inviting, densely green space dotted with sections of colour. It took a plant as cliched and dated as the Busy Lizzie and threw away all stereotypes and preconceptions. Placing the plants in an environment echoing their natural exotic setting, as a ground cover under trees in eastern Africa. The garden balanced them against a carefully selected mix of green perennials allowing them to shine yet keeping them subtle, allowing your eye to move through the garden without their bright vibrant colours being overpowering. I was a convert and the garden, even after just two days, had captured my imagination and had a place in my heart

And then…..the mention came that maybe, as I already knew the garden and had settled in suitably, that there was a way they could ‘steal’ me off the other garden’s volunteers rota for the remainder of the week. Part of me leapt in the air screaming ‘YES please let me stay and continue to work with you wonderful people’ (plus I kept getting brought coffee and ice creams – which wasn’t remotely a factor in my fawning admiration….honest!), yet part of me was hesitant. I’m not one for letting people down and if I sign up to something I like to stick to my commitments……but I come back to the coffee and ice cream. It turns out that caffeine and sugar wins out over moral obligation every time! The conversation was had, rotas were switched and I was to stay working on the B&Q garden for the full 7 days.

The days were long, the step counts were sizeable, muscles ached and there was so so much mud, which when combined with so so much sweat was simply delightful! The heatwave was in full force, which brought with it its own set of challenges (over and above those that always inevitably exist on a show garden build). Everything was wilting and in some cases quite literally before our eyes. With one hosepipe, the watering was having to be done on rotation so that everything was getting a drink as often as it could. With only 4 of us permanently on site, each day saw another group of volunteers who were roped into such activities, dragging around sprinklers, moving plants, mulching beds, sorting plant trolleys, wheelbarrowing compost and above all other things…the eternal task of deadheading. Due to the relentless nature of the flowering of the Busy Lizzie (an attribute bred into them over years of targeted propagation) those plants that had had their flowers removed at the start of the week by the Wednesday were in full bloom and needed doing again. Each plant that was put in the ground had all its open flowers removed beforehand, a somewhat risky approach that we hoped would ultimately pay off, with the aim that the new blooms would look fresh, perfectly timed for the judging on the Sunday and Monday.

The rest of the week followed suit. Hard days with intense heat, digging, planting, watering and deadheading. We employed the technique of reducing the percentage of each plant to be deadheaded as we got closer to the day of judging, in the hope of obtaining that perfect level of bloom.

All the while we were undertaking our tasks in, around and amongst the landscape construction team ‘Living Landscapes‘. It felt like we were in a ballet, dancing over painted wood, composting carefully around freshly laid paving. As a landscaper moved this way, we moved that. The lead landscaper, Tecwyn Evans and his team were in a battle against the clock, with twenty tasks being juggled at once, fighting to achieve as close to perfection as possible. From an outside viewpoint it may have looked chaotic, but it was organised chaos, with an ever present looming, immovable, deadline! 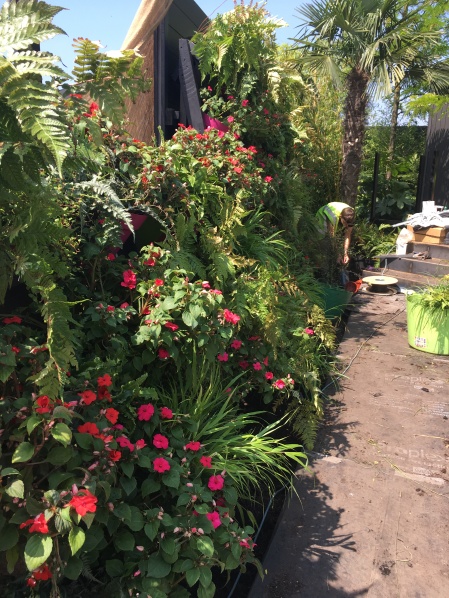 With each day brought with it a new group of volunteers and it quickly became clear that this industry is made up of some of the nicest, most generous people, who will happily help each other out, lend a hand and do whatever was asked of them, regardless of status. We not only had friends, family and students but established, highly respected garden designers, such as Rae Wilkinson and Eve Hacking, all turning up happy to give what they could to help achieve a finished garden.

And so came Friday, my last day on site…..or so I thought. I’m aware at this point of my story I’m running out of positive adjectives to use and am rapidly straying into a world where gushing is an understatement, but I had had simply one of the best weeks of my working life. The garden had been an absolute pleasure to be involved with and each person I had met along the way, a true delight.

As my final couple of hours on site were coming to a close most of the planting had been completed and as tinge of sadness started to well, Humaira approached.  She casually mentioned the need for some final garden preparation first thing Monday which was not only the day of judging but also press day and as an extra incentive made the extremely generous offer of giving me a plus one (namely the husband) to tag along. It was an offer, to use a heavily over quoted phrase (yet I find myself unable to resist), that could not be refused.

Arriving early on site Monday morning  we had 2 hours to do some final tweaking before the judges arrived. Having not been on the garden for 2 days the finishing touches, the dressing of the rooms, the furniture, the table decorations had taken the garden to another level. It stopped you in your tracks, those initial sketches and plans had been brought to life. 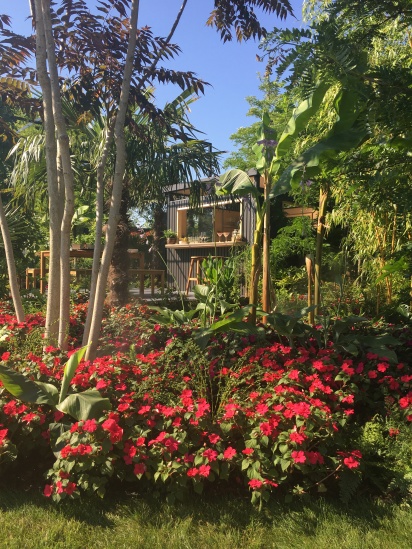 The garden was the epitome of lushness. The green perennials contrasting perfectly against the black decking, garden pods and grey slate paving. The busy lizzies providing a contradiction in terms, adding a subtle yet vibrant burst of colour, moving from pinks to reds to purples, as they spread like a blanket across the garden floor.

The trees were striking, beautiful specimens of Gleditsia triacanthos and Ailanthus altissima ‘Purple Dragon’ that added valuable height, drawing your eye as you moved your gaze through the space. The bamboo which adorned the far corner, swayed gently their rustling stems providing a calming background atmosphere. The palms and bananas dotted through the garden giving a well balanced touch of the exotic. The landscaping was precise with Matts design being brought to reality, the angle of the decking pulling you temptingly towards the patio seating, where an array of drinks greeted you at the bar and a comfortable chair enabled you to relax, drink in hand adjacent to the crisp water of the pool.

Once again the sun was shining, judging had taken place and we had nothing more to do but relax, enjoy the day and make the most of the space the garden had provided whilst waiting for the result. We were not waiting for long, around 2pm, in a somewhat unassuming manner, Matt was handed an envelope which contained the GOLD medal he had strived for. 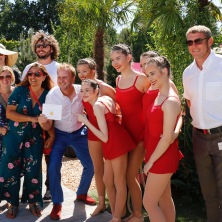 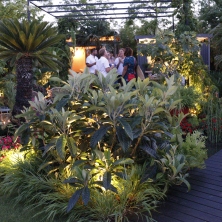 And so, the so dubbed ‘party garden’ embraced its title, champagne was popped, pimms jugs appeared, music was played and we took residence on the garden we had all worked so hard to build. Matts designs, Humaira’s planting and Tec’s landscaping had delivered on all fronts, a testament to their amazing skills, ambitions and determination. The next day the ‘B&Q Bursting Busy Lizzie’ garden received an undeniable ‘Best in Show’ with Tec also scooping the best construction award. It was a dream to have even been slightly involved and I came away from the whole experience knowing without question that this career path was the right one for me. Newly enthused and determined to become the best I could be.

I’m aware that at the start of part one of this blog I also talked about the week that followed Hampton Court. From the day spent with James and Helen Basson to the evening with Rosy Hardy. But I feel another break coming on and will save that part of the tale for another day, so once again…… if you’ll bear with me just a little longer……more to follow.