Fences – the one thing Little Acre is not short of is fences! The previous owners dabbled in the world of dog breeding and as such created the garden in such a way that each area could be separated from the other (allowing the dogs to go outside yet be kept apart if required).

From above the garden looks like a series of interconnecting lines resembling a complex game of noughts and crosses. Although providing quite a handy practical function, aesthetically speaking the harsh lines draw your eye.

As previously mentioned, having a background in ecology I’m always looking for the opportunity to benefit the local ecosystems. The obvious way to help soften the boundary and encourage wildlife would be to add a wildlife corridor in the form of a hedgerow.

Adjacent to our driveway our neighbour has recently planted a beech (Fagus sylvatica) hedge, so for balance it made sense to duplicate this the other side of our front garden, where one of the said fences currently sits. This would also have the added function of screening the paddock from the road. 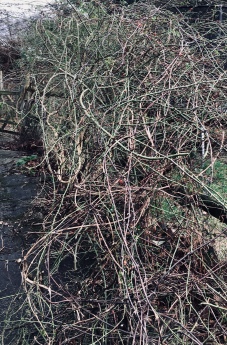 There is another section of fence line adjacent to the greenhouse and sheds, which was overran with climbing roses. These said roses ensured that each and every time you attempted to enter the shed you left a small part of yourself behind, the thorns taking hold of your clothing or if you were particularly unlucky a chunk of your flesh. The other side of this fence was the old paddock which our children have now taken over as their play area. Currently adorned with an array of play equipment the presence of the roses added an air of danger to basic playtime.  Although we have no problem with our boys engaging in extreme sports further down the line, having our three year old navigate through a thorny path in order to use the slide, just seemed wholly unnecessary.

Removing the roses could form a blog post in itself, but to cut a long story short I am now a true convert to gold leaf winter touch gloves. So many thorny branches entangled with so many other thorny branches, wrapped around chicken wire, entwined throughout the fence line.

To tie in the different areas we decided that also placing a beech hedge alongside this fence would be a suitable rose replacement…..to be completely honest with you I would love to say that the designer in me took a step back, considered the garden as a whole and after much debate selected the beech. In reality it does allow for a common flow between the areas however the main reason behind this choice was that it enabled us to take advantage of bulk buy discounts, saving 15% off the total costs.

As we progress further into the development of Little Acre, it is becoming clear that design ambitions and grand aspirations will often need to be balanced against (and more often than not driven by) practical considerations…..namely cashflow!

Having picked up on a supplier recommendation from @AllHorts an online Horticultural group (Hopes Grove nursery whose service we can do nothing but praise) we eagerly powered on. The order was created and we sat back and pondered on how to approach the task ahead.

The following day (less than 24 hours after ordering) there was a knock at the door and to our utter surprise our bare root hedging plants appeared (and a mental note was made to read in detail the delivery times on all online purchases moving forward).

We were woefully ill prepared.

As barefoot plants will only last a few days in their delivery packaging and only then if stored in a suitable frost free environment, we had two options.  We could find somewhere to heel the plants into the ground, temporarily.  This would give us a grace period of a couple of weeks or so, the time restricting factor being that you want to plant them before new growth starts to appear. Or……..just roll up our sleeves, put everything else of hold and dig like we’d never dug before!

So that is what we did. Turf was stripped, trenches dug and refilled with soil and compost, which had been wheelbarrowed from the old garden waste pile at the top of the woodland. Part way through this process our neighbour, who had been keeping an eye on our frantic proceedings, appeared with a mattock for us to use. Now, those that know me know that by far my favourite DIY tool of destruction is my gorilla bar (an extra large crowbar!), so to discover its garden equivalent made me exceedingly happy. If you don’t know what a mattock is, it basically looks like what would happen if an axe mated with a spade, then took a whole bunch of steroids.

With the mattock in hand our task finally looked achievable as it drove a path through the stoney soil like a hot knife through butter.

And then came the rain………so much rain!!

We had no choice but to power on. Covered in a delightful mix of rain, mud and sweat, the trenches were finally complete. Rootgrow a mycorrhizal fungi which aids root development, was added to the roots of each plant and as the sun was setting on the Sunday, the final plants were put in. 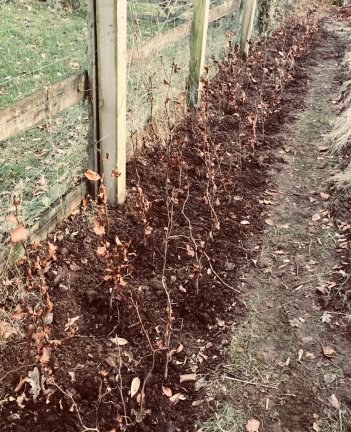 We were now hedge people. All that was left to do was to sit back and watch our plans of a private, wildlife friendly, yet stylish garden, unfold before our eyes…….well…..in about 5 years that is, when hopefully the individual, somewhat straggly looking, whips will have finally reached their potential and produced a fully formed dense hedge!